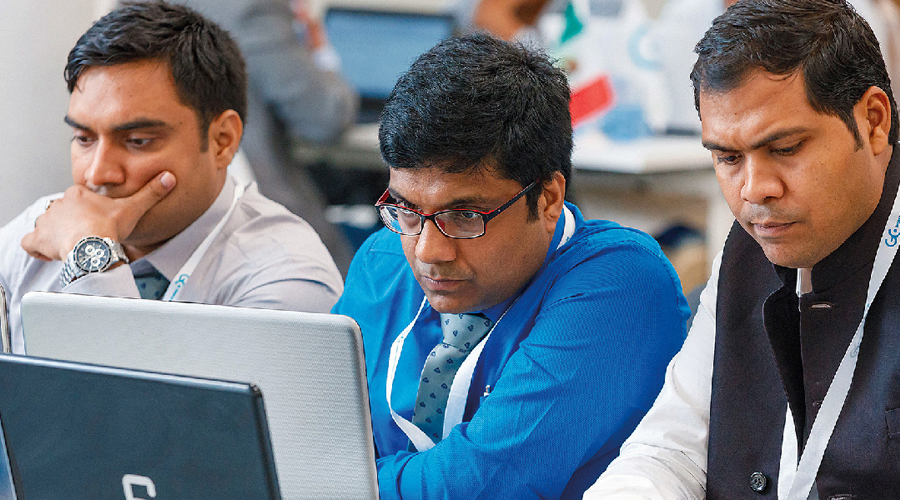 In the last international final, the team from India

Approximately 3,500 students and staff participated in the 2020 edition of the test in this country.

The edition of the Global Management Challenge 2020 in India recently ended, with the victory of a team made up of executives. The national final was held online due to the pandemic, in an edition with the participation of 3516 students and staff, distributed by 768 teams.

“Given covid-19, we had to make a series of changes, in accordance with government guidelines, to ensure the success of this edition. One of the biggest challenges was reaching the 768 teams, as we were in the middle of a confinement, with people separated and working from home, ”says Lav Agarwal, organizer of the competition in India. He believes that the number of teams reached is proof that the participants, particularly the students, realize the benefits of this strategy and management challenge that allows them to run a company. Next year the expectation is to reach 1500 teams.

As for the national final of 2020, held online, the victory fell to a team of executives and she will be the representative of this country in the international final, scheduled for the first half of next year, in Macau.

Indian organizers this year conducted a survey of Global Management Challenge participants about their experience at the event. Regarding the results, Lav Agarwal points out that “60% confirmed that this initiative helped them to develop communication and teamwork skills. 75% already revealed that the test allowed them to understand how the various departments of a company interact with each other, as well as to create business models. One of the main lessons learned in the Global Management Challenge is to develop knowledge regarding the analysis of financial data, and this was confirmed by 80% of the participants ”.

Lav Agarwal believes that for students this competition is seen as an opportunity to put themselves in the shoes of a manager and to make decisions in a competitive environment. “Most of the academic curriculum in India is based on the analysis of case studies and classroom teaching. Therefore, working on a business simulator provides a new format for improving knowledge and comparing performances with other students. ” He also stresses that "students with good performance in the competition are considered by recruiters as more prepared to work".

Many of the staff members of the Indian edition of 2020 came from areas of training such as engineering. “Companies identify this challenge as an opportunity to develop management and networking skills for their employees. Cadres also have the opportunity to make decisions in areas where, as a rule, they do not operate, which allows them to understand the priorities and constraints of these departments and thus work better with colleagues in those areas, benefiting the company from better management decisions, teamwork and greater productivity ”, concludes Lav Agarwal.

START OF THE SECOND ROUND

The second round of the Global Management Challenge 2020 began this week, with the participation of 55 teams. The formations are divided into eight groups and the table above reveals the names of those who, after making the first decision, this week, occupy the first and second places of their group. This second stage of the competition comprises four more weeks of management decisions, and in the fifth and last decision only the teams that are in the lead of their group will be part of the national final, scheduled for February next year. For now, IT Sector is the entity with the most teams in the lead, with a total of two.

Competition with new certification in management

Managing a company as a team

Global Management Challenge is the world’s largest strategy and management competition based on a highly advanced business enterprise simulation. The competition is open to company managers, professionals and entrepreneurs organized as team consisting of 3 to 5 members.